“By Heart” Now on Audiobook 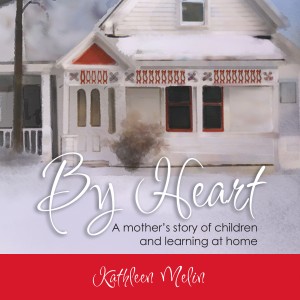 When By Heart: A mother’s story of children and learning at home by Kathleen Melin was first published in 2008, it came with endorsements from social visionary Eric Utne, radical educator John Taylor Gatto, and Chicago poet Barry Silesky. In the intervening years, the diversity of the readership has continued to grow. Though the book examines issues around home schooling, it is fully a literary memoir that takes readers on a journey and explores the sometimes baffling social and cultural norms for parenting and education.

Melin narrates the book herself. “I’d done some work on radio in the past and the idea of narrating my own book was really appealing,” she says. “It’s been eight years since the print edition came out, so I had some distance from a former self and stage of life. As I narrated the book, I kept thinking: Wow, this woman really put a lot into this!”

The idea of writing about home-based learning as a memoir developed when Melin was in the MFA Creative Writing Program at the University of Minnesota.   There she worked with seminal memoir writer Professor Patricia Hampl, whose first book, A Romantic Education, helped revolutionize the genre.

By Heart stands out as a literary memoir created by a compelling storyteller.

Melin’s clear prose and thoughtful, non-doctrinaire approach to many key homeschooling touchpoints are a welcome addition to the literature, and her book will stand alongside Guterson’s “Family Matters” and Wallace’s “Better Than School” as must-reads in the genre.

The audiobook of By Heart is available through Audible, iTunes and Amazon. It was created at RedBird Studio with sound production by Dave Frank.